There are almost as infinite a number of science fiction definitions as there are stars in the universe, but of all the definitions out there, this is my favorite. It appeared amidst the glossy pages of Analog Science Fact/Fiction magazine in April 1973. The editors had a real treat for their readers that month: an introduction penned by none other than Ray Bradbury, author of the critically-acclaimed Fahrenheit 451 and the pulp-classic Martian Chronicles.

Here, Bradbury casts Science Fiction as a ‘a fable teacher’, because fables always have morals, a lesson: a message. Science fiction offers a great forum for speculation and experimentation. It is a genre which can ask questions like: what would it be like to discover a land populated entirely by women? Or, if there was a planet populated by a species who had evolved with three biological sexes instead of two, how different would it be from our own? Or, as one TV show first broadcast in the US in September 1966 dared to imagine, what would happen if humanity abolished money, abandoned racism, xenophobia and intolerance and united in the mutually beneficial endeavors of self-improvement, the expansion of knowledge and the preservation of peace across the galaxy.

The author of this outlandish Humanist utopia, pitched to studio executives as a “wagon-train to the stars”, was of course Gene Roddenberry, and the phenomena he had given life too was called Star Trek. This crazy little show imagined, in eye-popping techno-color, that in the distant future Earth had become part of a United Federation of Planets, described by the Captain James T Kirk, as a “dream that became a reality that spread across the stars.”

The United Federation of Planets was an interstellar federal republic, composed of planetary governments that agreed to exist semi-autonomously under a single central government based on the principles of universal liberty, rights, and equality, and to share their knowledge and resources in peaceful cooperation, scientific development and space exploration. That exploration is carried out by Starfleet, a deep space exploratory and defense armada. Starfleet’s principal functions included: the advancement of Federation knowledge about the galaxy and its inhabitants, the advancement of Federation science and technology, the defense of the Federation, and the facilitation of Federation diplomacy. As everyone on Earth is surely aware, The USS Enterprise NCC-1701 was a Constitution Class federation flagship, Captained by the aforementioned James T Kirk. And, in fitting with Federation ethos, Kirk was joined by a diverse crew; an alien first officer, the Vulcan Mr. Spock; a Doctor from the American South, Leonard McCoy; a Scottish chief engineer, Montgomery Scott; a Russian ensign, Pavel Chekov; a Japanese helmsman, Hikaru Sulu and a female African American Comms. Officer, Nyota Uhura.

Though the civilization that Roddenberry imagined had long sense abandoned intolerance, it is worth noting how extraordinary it is that this crew found a huge prime-time, main-stream audience in America just two decades after Pearl Harbor, during the throes of both the Cold War and the Civil Rights movement. It sends a hell of a message, and this was absolutely deliberate. Later, Gene Roddenberry had this to say about what he and the show’s makers were trying to achieve:

I love the crew of that ship, and that original show, but my biggest love affair actually comes much later in the history of the franchise, a full generation later, when we meet Captain Jean Luc Picard, and the equally diverse crew of the Enterprise D. And one of the reasons I love Star Trek: The Next Generation, and actually much of what followed in Deep Space Nine, Voyager and, yes, even Enterprise, is that the franchise really demonstrates how Science Fiction does function as a thought experiment; examining, interrogating and testing ideas.

For me, the best Star Trek is that which actually turns its interrogative gaze back on Roddenberry’s seemingly Utopian dream. There are episodes which gently ask the audience how successful this futuristic society really is. For instance, some return to the Federation’s core mantra – ‘to embrace diversity in all its forms’, and ask: by no longer remarking upon difference, to what extent has the Federation actually erased difference?

The Federation prides itself on incorporating new worlds as it expands for the good of the many, but, as some of the later films explore, this involves the complicit subjugation of these new worlds to a single government, which begs the question: is the Federation a useful and progressive alliance or a tyrannical super state (a question I’m sure many of you will remember from our own politics during the summer of 2016)?

And most intriguingly, how different is the Federation from its arch enemies, a techno-organic species known as the Borg, who ‘assimilate’ all other alien races into their own as they spread across the galaxy. On paper, their famous catch-phrases look totally antithetical to Starfleet’s core values. The Borg tell their prey: ‘You will be assimilated’, or, ‘We will add your distinctiveness to our own’ (or, perhaps most famously, ‘Resistance is futile’). But how actually different is ‘your distinctiveness will be added to our own’ from ‘we embrace diversity in all its forms’, because ultimately, if you join the Federation you become part of a growing homogenous culture.

I love Star Trek because it not only challenges us, it challenges itself; it dares to subject its own ethos to the same scrutiny as that which it seeks to trouble. It isn’t content simply destabilizing racism, xenophobia and intolerance, it is just as interested in questioning our ideas of progress, liberty and tolerance. And that’s why, quite frankly, I don’t think there’s anything else like it. 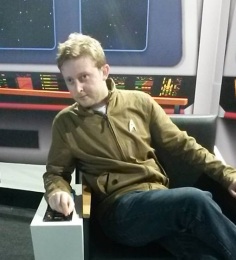