The First Meeting, by Abi Curtis

They were expecting me. They had been given a manual of sorts, describing human anatomy, psychology and emotion: a sort of Ikea flat-pack affair consisting of images and complex mathematical equations that I knew amounted to something like me. But I didn’t have a similar one for them. I had been briefed about safety but otherwise did not know what to expect. Their planet was habitable to us, very pleasant actually: breathable air and rich soil (though this latter was an alarmingly florescent yellow in colour). But, ironically, they found their own atmosphere quite hostile and had created a kind of thick, slippery liquid in which they had to live. It was the only way in which they could ‘breathe’. The liquid was extracted from a species of local succulent, purple in colour and growing in abundance, and then it was genetically modified to create their habitat. In order to meet them I would have to enter a lake of this thick slime wearing a diving suit designed to filter it. The pinkish liquid moved up to my torso. It was lukewarm with a slippery, silky feel to it – not entirely unpleasant. It smelt faintly of lemons and smoke. I was afraid at first to immerse my head, but felt comfortable enough when I took my first, thick breath.

They rose up to meet me from the bottom of the lake. Not aquatic-looking, nor humanoid, but furless and grey-to-pink, mottled and thick-skinned. The head part was wide, plated as if in armour, but the winnowing body was jelly-like, amorphous and transparent with all sorts of flashes and shapes moving around inside it. And then the whole thing would darken as if shifting into another dimension. Their ‘sound’ was like a squeezing touch to my brain. I shuddered right down to my fingertips when they ‘spoke’ to me, and I felt very sick, but I understood it was their form of welcome. Then I felt their quick, trembling apology for the unintentional discomfort they had caused. I spoke back, silently, in my head, as I had been trained. I thought a polite ‘hello’, an enquiring greeting. I tried to focus and tell them all I could about being human, about Earth. We’re kind; we like to be together, to love our families. We also fight. We do. But only because…and there are bodies destroyed, decimated, bloody. But we don’t have enough, that’s why. Or we believe different things and can’t agree. But we love to touch our skins together, to feel one another. But also to destroy with fire, or watch destruction. But…

The aliens stopped me there, pressing somehow on some node or synapse in my brain. I felt no pain but my thoughts were paused. It did not understand me. I felt it trying to manipulate my thoughts, to make them easier to understand. When the pressure cleared and my mind continued, my thoughts were different and did not come out as I intended. Exactly. We pull against one another. We don’t even know why. We each have a dark shape inside us that we don’t know about. The fire melts it all down. The snow twists in, cleaning everything, silencing it all. There is dust in the streets. And clouds rushing away, like the ones you have here, but white or grey. Or pink. And mechanisms that make and break. And great pines of hot, mirrored glass with rooms inside them. And inside: capillaries and veins and roots that must keep working or else. Babies grow in pods like peas – motionless, fatherless. We have this layer to us, beneath everything else, something we cannot touch or know. It is inside but we look for it in others all the time. Jumps. Ones and twos and threes and sevens and nines and twenty-ones. Rising up.

What I ended up saying was unsatisfactory to say the least. It was the aliens’ turn to shudder. I watched their bodies phase in and out, darken, flash with many intricacies like springs of light, clockworks of photons, then stabilise again. They didn’t seem to have eyes, but some veiny and slightly gruesome opening at the front. They regarded me coolly. I sensed they felt a great pity for me, and something in me shifted. I wanted only to stay here, in this slime, and learn about how they lived, how they might offer a way of being, though I knew it wasn’t really possible to be like them. I knew that in my heart of hearts. 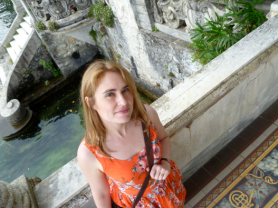 Abi Curtis is Professor of Creative Writing at York St John University. She has won an Eric Gregory Award and Somerset Maugham Award for her poetry collections, The Glass Delusion (Salt, 2013) and Unexpected Weather (Salt, 2009). She has a PhD in Creative and Critical Writing and is inspired by art, psychology, science and the environment. She has written on such subjects as mushrooms in Freud, squid in literature, and the creative possibilities of pollination, and often collaborates with artists and musicians. Water & Glass, her first novel, is published by Cloud Lodge Books .