So you have a sky and some fairly florid description of the sky and what’s important is that it isn’t our sky. There’s an orange planet rising, roughly twice the size of our moon, and there are also three little moons which describe an arc to the right of the orange planet. Anastasia is standing at the long window of her simple condominium with her six year old daughter, watching the sky. She runs her hand through her six year old daughter’s hair. Or maybe that’s wrong; maybe that’s the sort of thing you like to think you’d do under a new sky. Maybe Anastasia is watching the sky in fascination, as she has done for the last 434 nights, but her daughter is sitting at the table in the open-plan kitchen-dining area, playing a Match Four game on a very thin tablet and squealing in frustration. It’s a Match Four game where you move and match planets in horizontal or vertical lines – no diagonals – and Anastasia’s daughter is on level 36, and far in excess of her screen-time-limit which Anastasia has lost the heart to enforce, and maybe that’s all you’re doing right now in trying to describe the scene. Do you have to choose between space kids are miraculous and we are so grateful and space kids can be a real pain in the ass? Which combination will make the four planets disappear?

At some point you’re going to have to describe the other two moons even if there isn’t very much to say about them. Likewise bureaucracy, the perfect and imperfect systems, the selfless public servants and venal self-publicists – this is, let us remember, not our public. Likewise agriculture and diet. Mushrooms are easy to cultivate. Leathery dark green leaves which are tough but very good for you. And a meat substitute which grows on slides from a single cell and, with the right sauce, is all but indistinguishable from the real thing. Anastasia, actually, is now celebrated on Earth for the very scandal she fled which, at the time, not only ruined her reputation but gave her legitimate fear for her own (and her family’s) safety. Just change it. Don’t tell anyone. Make all the fast-food chains secretly vegan and just don’t tell the fuckers. See if they even notice. That was after the second Great Beef War of 2___. At some point you are going to have to write a tedious prequel. The Cow’s Crusade. Maybe it can be outsourced.

At this point Anastasia wanders over to her daughter (you can say that she “abandons her twilight vigil” or something like that) and actually does run her hand through her hair, but her daughter says ‘Mum,’ with two syllables and shakes her head violently. The family-set up should emerge naturally within the first couple of pages. Maybe her husband went with them but his “heart was never really in it” and he resented Anastasia, perhaps he’d secretly harboured these resentments for a long time, of her success and relative profile, (let’s say in spite of this being the 2_th century he’s still secretly victim to the idea that as the “man” he should essentially be the provider with all the power that entails and felt jealous that his own work was comparatively, et cetera) but now that she had literally forced them into interplanetary exile he was no longer able to contain them, the resentments, and the relationship didn’t last long in the colony and they’re both with new partners now. Or maybe, in the colony, people are fairly relaxed about sex. Maybe we’ve taken the opportunity of a fresh, post-Enlightenment start to do away with notions of attachment and ownership and with them sexual exclusivity, so that you might meet a friend for a coffee and you might also have sex with them. You’re going to have to consider whether this take on sexuality tends to foreground the masculine. Isn’t it a utopian trope because the golden age of science fiction was largely written by bed-ridden war-vet horn-dogs too tired or unwell to masturbate? Maybe that doesn’t matter. Maybe the truly compassionate thing is to gently but forcefully jerk them off. What now?

Maybe, that being the case, Anastasia’s ex is still on the scene and they actually have a pretty good relationship and that’ll be him now. You would like the doors to be automatic and very quiet but actually energy needs to be conserved and the doors are just doors. Light wooden doors because the climate is tropical and – this is going to need some unpacking – there’s no crime. This is problematic because any organised system is really a form of crime and there can be no bureaucracy without criminality and vice versa; this is, anyway, how Anastasia feels. Maybe this story will turn out to be about the first murder. You’re getting that dull feeling in the pit of your stomach again. What are you really trying to say about human nature? That’s very important. Anyway, Kevin is here and Anastasia’s daughter immediately drops her tablet and goes to him and he says something sitcomy like ‘Hi, pumpkin!’ and runs his hands through her hair and Anastasia feels a pang of– The conflict you’re creating is boring. This is no better than the first murder. They eat a thick mushroom stew and then they play a board game about terraforming which involves a surprising amount of character-creation and world-building for what is, essentially, a worker-placement mechanic.

Here’s the thing: there is some concern – it is the subject of many op-ed pieces – that some of the new émigrés are in fact former beef gangsters. I mean of course they are. The chancellor himself was a general on the wrong side of the conflict, but he fully repented. This new wave is different, though. Oh, they’ve suffered and have visible and invisible scars to prove it, that’s certain. But how would we know if they didn’t have some ulterior motive for coming here? This is why Anastasia takes a sedative before reading her daughter a story about a robot who can’t stop crying. So that she falls asleep at the same time, one arm under her daughter’s neck, The Stupid Moon imperceptibly turning, turning, so that it resembles a badly damaged human ear. This is… I don’t know. I’m not sure if this is going anywhere. This is why Kevin sits up in his buggy all night outside the condo, watching the glittery, plastic road. The roads are made of recycled vinyl records. Drive slowly and you can hear bury my body lord I don’t care where they… That’s rubbish. Scrap it.

The first little moon is. The third little moon is. The orange planet, which is now setting and half-visible on the horizon, appears large enough that you can make out craters in high-definition, chemical seas, an inexplicably long and straight crevasse which cambers a little, but only a little, almost like a smirk. 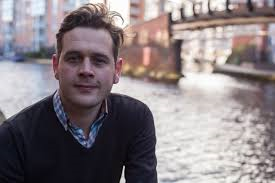 Luke Kennard is an award-winning poet, critic and writer of fiction, publishing on prose poetry and Absurdism in contemporary poetry. Luke is a Senior Lecturer in Creative Writing at the University of Birmingham. His published work includes sf texts Holophin (2012) and The Transition (2014).