The Brontës and science fiction: Gondal and Angria as virtual worlds, by Maria Seijo-Richart

The Brontës and science-fiction: Gondal and Angria as virtual worlds[1]

It may sound strange to link the Brontës to science-fiction. The term was first used in 1851,[2] when all the siblings except Charlotte were dead. However, Bradshaw described the isolated setting of the 2011 transposition of Wuthering Heights (dir. Andrea Arnold) as “a hundred years after a nuclear strike”. The film I walked with a zombie (1943, dir. Jacques Tourneur) is a transposition of Charlotte’s Jane Eyre, with Mrs. Rochester as the victim of a voodoo spell; while a recent stage version of Vilette (2016, dir. Linda Marshall-Griffiths) was set in a post-apocalyptic dystopia. Science-fiction did not originate from modern technology. There are examples of subgenres such as the utopia as early as 414 BC (Aristophanes’ Nephelokokkygia). During the Brontës’ lifetime, works of speculative fiction such as Mary Shelley’s Frankenstein (1818) and The Last Man (1826), considered the first science-fiction disaster novel, had already been published. E.T.A. Hoffman, who influenced the sisters, published ‘Der Sandman’, about automaton Copelia, in 1816 (see Ashley, 2011).

In 1826, Reverend Brontë brought his children (then between ten and six years of age) a box of wooden toy soldiers from a trip to Leeds (Barker 154), which they used to create a game of epic battles and imaginary kingdoms: Angria, for Charlotte and Branwell, and Gondal, for Emily and Anne. The children crafted their imaginary worlds with obsessive attention to detail, drawing maps and creating biographies for their characters. Angria and Gondal can be described as a precedent of J.R.R. Tolkien’s Lord of the Rings (Ashley 66) or the Narnia Chronicles by C.S. Lewis, two authors who also started creating their imaginary worlds in their childhood and adolescence (Bray). In 2011, the exhibition “Out of this World: Science Fiction But Not As You Know It” at the British Library daringly included the juvenile game in the section “Virtual Worlds”. Exhibition curator Andy Sawyer considered the imaginary kingdoms “teasing examples of what might be called the beginnings of science fiction” (Goring). Ashley compares Angria and Gondal to role-playing (66), as the game involved acting out events. In 1845, Emily and Anne (both in their late twenties) entertained themselves during a trip to York by role playing to be Gondal characters (Alexander xxxvi). The siblings composed many poems and prose chronicles about the kingdoms. The chronicles were handwritten in miniscule print (requiring a magnified glass to read) in tiny booklets, so they could be held by the toy soldiers (as if they were the authors instead of the children). The miniscule handwriting was also an effective way to hide the game from the adults (see Alexander xviii). Bray compares the booklets to “the early fanzines created by science-fiction fans of the 1930s”. Unfortunately, the Gondal prose is nowadays lost, so we can only reconstruct the narrative through the poems (which can be cryptic) and several allusions to them in the sisters’ diary papers.

Some Brontë scholars (i.e. Barker) questioned this link to science-fiction. Alexander argues that “there is nothing futuristic or scientific” in the juvenilia (Heathcote). However, futuristic elements are not compulsory in all the subgenres. Emily and Anne named their Gondal heroes after the famous Artic explorers Parry and Ross (Alexander xvi), which connects them to the “fantastic voyages” subgenre (i.e. Jonathan Swift’s Gulliver Travels, 1726), later developed by Jules Verne. The dystopia subgenre depicts alternative realities, distorted visions through which to explore the anxieties of the present. Gondal was supposedly “a large island in the North Pacific”, but the climate, customs and landscape resembled Yorkshire’s (Barker 502). The Brontës were writing in the 1840s, at the beginning of the Industrial Revolution which later inspired the steampunk genre. The textile workers who join the Luddites revolution in Charlotte’s Shirley (1849) expressed the same fears about mechanization as many science-fiction texts do. While many dystopias were inspired by the dehumanising First and Second World Wars, the Brontës had their real-life referent in the Napoleonic wars (1803 – 1815). One of the Angria toy soldiers was named the Duke of Wellington (Alexander xvi). These recent wars were “topic of debate in the household” (Stasi 130) and the source of inspiration of the Gondal storyline about the civil war between Royalists and Republicans. Although the narrative does not clearly act as “cautionary tale, social commentary” (Goring), which is the case in science-fiction, Gondal texts emphasize the aftermath of the battle, the devastating effects on those who died and those left behind. While Angria plots focus on the glory of combat, Emily’s Gondal is nearer to the work of authors like Ray Bradbury, who prioritise the human aspects of a story over technology.

Gondal was an alternative reality in which women were unconstrained by conventional morality. Similarly, many women started writing utopias to express their own wishes for freedom (i.e. Roquia Sakhawat Hussain’s ‘The Sultana’s Dream’, 1905. See Ashley 130). While Angria heroines are often the victims of cruel men, Gondal is a feminist epic, about a kingdom ruled by independent queen A.G.A. (Augusta Geraldine Almeda), who is ambitious and cruel, and who has multiple lovers, contrary to the archetypical ideal of femininity (the “angel of the house”) of the nineteenth century. Gondal women probably took part in battle. In Emily’s Belgian devoir ‘Le siege d’Oudenarde’, she praises how the women, “that class condemned by the laws of society to be a heavy burden in any situation of action or danger”, “cast aside their degrading privileges and took a distinguished part in the work of defence” (Lonoff 7). She was maybe inspired by her fascination for real-life female authority figures: Queen Victoria and Mary, Queen of Scots (Alexander xxxv). In her diary paper on 26th June 1837, the accession to the throne of young queen Victoria (20th June 1837) precedes by a month the coronation of A.G.A. and Julius Brenzaida as Empress and Emperor of Gondal. Both events are described in similar tones, as if the imaginary world and the factual were equally real to her. While the pressures of adult life eventually led her siblings away from the juvenilia games, Emily remained committed to Gondal all her life. Her imaginary world was a way of affording herself the freedom which society had denied her.

Ashley, Mike. Out of this World. Science Fiction but not as You Know It. London. The British Library. 2011.

[1] Part of this article is based on my presentation ‘Emily Brontë’s Gondal saga: a precedent of fanfiction?’, at the at the Bicentenary Conference: Emily Brontë: a Peculiar Music, organised by the Brontë Society, York, 7th – 9th September 2018. 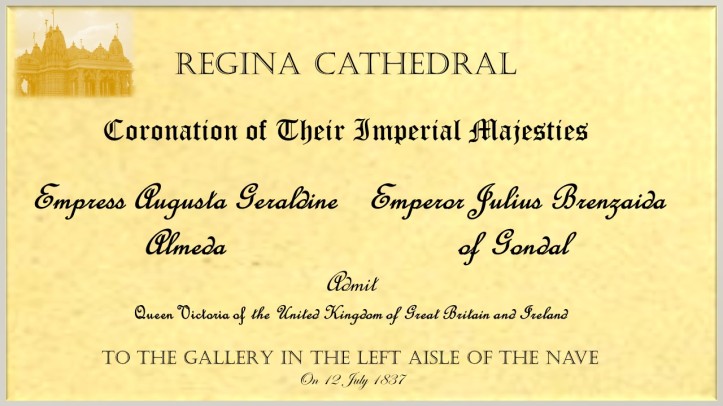 Emily’s diary paper: Monday evening June 26, 1837: “…the Emperors and Empresses of Gondal and Gaaldine preparing to depart […] for the coronation which will be on the 12 of July. Queen Victoria ascended the throne this month.”

Midnight. The smoky steamboat taking us to Gondal advances across the dark sea, extending like a cloak in front of us. I watch from the deck, caressing my belly, where you are. The soothsayer says you will be a girl. If you are, I will name you Alexandria. I am your mother, Augusta Geraldine Almeda, and in two weeks’ time I will be Empress of Gondal.

Queen Victoria of Britain confirmed she will attend the coronation. She has been Queen barely a month! She, who rules an empire, wants to see our tiny island. Gondal, where the women train and fight alongside the men, where the Empress and the Emperor will have equal power. It was not always like this. My first husband, Lord Aspin, wanted me to sheathe my sword, to be quiet and smile when they discussed affairs of state. Can you believe they criticised me when I left him for your dad? Julius Brenzaida, whom I loved since childhood. Whom they severely criticised for treating me like an equal. Was it so horrible to choose true love?

Your father does not know yet that you are coming. I know he will be angry with me. How will I tell my beloved Julius that I entered in battle despite knowing I was pregnant? But I had to do it. Because we had to fight side by side. Just like we will rule Gondal side by side. For all the female warriors who joined our cause. For you and all the women who will descend from you. Maybe, in a distant future, they will remember our story… and smile when they think about us.

Dr. María Seijo-Richart has an International PhD in English at the University of A Coruña (Spain) and an MA in World Cinema at the University of Leeds, where she currently works. Her science fiction favourites are the two Rays: Bradbury and Harryhausen. María enjoys writing fiction, especially epic stories about female warriors.