372 earthling years ago he was there, gathering evidence of intelligent life. Collecting information about the (as they called themselves) humans, by observing and scouting. Swiftly he engaged with the earthlings, broadening his knowledge about the development of their life and culture. Yet communication between him and the species inhabiting earth was harder than expected. Back then they hadn’t evolved to their full potential.

Humans use words. A rather clumsy way of communication and far from effective. It leads to misunderstandings, disagreements and speculation, often resulting in dispute; far too often settled with blood. On his home planet everybody communicated via telepathy. Thoughts are sent directly into the counterpart’s brain. This isn’t like spoken language with sentences having to be built, it is more like pictures and signs. A quick and effective way to exchange information.

The humans he had met couldn’t comprehend his way of thinking, and he couldn’t express his thoughts. Although he had been told he was interacting with a highly intelligent species he had to adapt to the primitive method of delivering information.

The success he hoped for was minimal. Yet, still, they had shown promise. Maybe if they themselves could understand their full potential, they might thrive and become strong as a community. They might strip all ineffective behaviour and strive towards sublimity and excellence.

Contrary to the views of his co-pilot he had great hopes that humans would succeed in overcoming their many failures. But having an estimated lifespan of 80 odd years to do so is not a very long time, especially in contrast to his kind. Yet he had anticipated a moment when people would thrive, when they would evolve. This was the time. This was the reason he returned to Earth. He needed to know!

The displays on his space craft, a kind of holographic panel, spiked as they approached the planet. An alarm went off. Something was wrong, readings going far off the scale. A hologram of the earth became visible. The planet looking different now than it had before. He checked twice to see if the ship’s sensors might be malfunctioning. The planet’s main land had almost disappeared – it looked to be under water. The remaining land was mostly dark, dead. He closed his eyes and pictured the wonderful landscapes which had once dominated the horizon. Forests, valleys and rivers, all gone. The blue planet now grey with scarce hints of green.

Turbulence hit the ship as he entered the planet’s atmosphere. The ship’s sensors picked up ionised atoms in the stratosphere. He tried to skew, but it was too late. The propulsion system was already affected. The turbulence got stronger as the pilots struggled with the controls of their ship. More holographic panels appeared, quickly calculating the possible outcomes. He decided to break through.

Losing control, the ship raced towards Earth like a meteor. The pilots were deafened by the sound of ionised air hitting the ship’s outer shell. He felt the heat caused by friction as the ship broke through the troposphere. The holographic panels blinked on and off as the ship started to stabilise. The speed decreased and he regained control over the piloting system.

Sudden silence. Focusing on his sensors and displays he discovered a beacon, emitted from the area once called London. Setting the ship to the location of the signal he wondered what had happened. Did humans look into the abyss, into the face of their own fears and failures? Did they fail to resist?

He stepped out of the ship’s air-lock, wearing a suit covering his spiracles. His co-pilot has sent him a warning sign telepathically. He understood instantly, all meaning conferred in one moment. Cautiously he put one foot after the other, assessing the overall situation. Skyscrapers, once dominating the cities of the world, were now in ruins. Last time he was here life was blossoming, full of happiness. But no more. Instead of rivers flowing and beautiful and colourful landscapes stretching out as far as the eyes could see, he saw nothing more but barren land.

Despite the desolation he smiled. Life finds its way. Plants, bushes and even some trees were emerging from the seemingly lifeless ground, even growing from the building’s walls. A good sign for the planet, but a very bad one for its inhabitants.

He moved in on the signal. It should be close now. Watching his receiver he took one more step, wondering where the signal might come from. Then he heard a sound, a crack under his feet. Glass, which was overgrown with ivy. It broke and he fell several meters down. Glass shattering all around him, his senses gave in. Darkness.

Slowly he regained consciousness and tried to stand up. Too far to contact his co-pilot he looked upwards. A way out would be great! But then he heard a sound. The beacon? He turned around and realised he was standing in a sort of laboratory. A broken monitor on the other side of the room. In front of it a skeleton lingering on the desk, dressed in a worn out white coat. As he approached, the monitor stopped flickering. He pressed a button on the screen in front of him and it sprang to life; whatever back-up power system had been used was just about holding out. A face appeared on the screen and a man wearing a white coat stared out at him.

“Log 3.738, May 11th 2315. My name is Dr. Nathaniel Roberts, chief science officer of the PERSEPHONE project. We hope you will never see this message, but if you do, my worst fears have come true. We are doomed to repeat our mistakes of the past. Greed, sloth and fears, as well as people who used these fears to gain power, led us through a fourth world war and the destruction of our own planet. Earth is from now on uninhabitable. We haven’t learned from our past! We repeated our mistakes and cannot break this circle. This is why we established project PERSEPHONE. We found a planet in a far off system, which we think is inhabitable. We have sent 300 souls to that planet with one reason: save humanity from itself and extinguish the past, so new ways of life may thrive. If you are watching this and come from Terra Two we have failed. And humans will eventually cease to exist. But life finds a way. It always does. So hopefully I will be only a thing of the past, but not a memory. Farewell and good luck”

The video ended. Tilting his head he looked at the monitor as a message appeared on the screen:

He smiled and pressed a key. 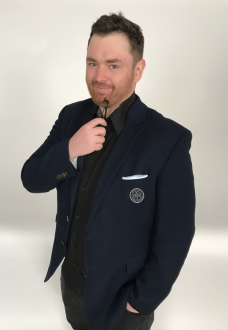 Sebastian is a freelance creative content marketer for companies in Germany, Poland and Austria. He studied theatre, film in Vienna, before graduating with MA (distinction) from York St John in 2012. His film, Persistence, won 6 LA movie awards amongst other accolades.