[Please note that this short essay discusses the endings of – and therefore contains spoilers for – Tarkovsky’s films Solaris and Stalker, and Le Guin’s novel A Wizard of Earthsea.]

Where are you now, children of the earth? What is this place we have named, on your behalf, Terra 2?

Yours has been a journey beyond imagination. We, your forefathers and mothers, cannot begin to envisage the world you now inhabit.

Except, this much we know. Journeys have been a consistent theme in our science fiction, whether in literature or in films. One very striking common thread is that the destination, sometimes revealed only in the final frame or page, is frequently not so far from the point of origin as might have been expected. Sure, it may be far away in terms of physical distance – but not necessarily so in relation to the far more important realm of inner space.

As an example, the final shot of Solaris (there are several film versions – the greatest is that by Andrei Tarkovsky[1]) is of a faraway alien world, in the middle of which – shockingly, but fittingly – lies the protagonist’s own house. The voyagers in that tale have travelled vast distances, only to learn that the true destination has been their own inner selves. As the author of the novel on which the film is based puts it:

In another of Tarkovsky’s films, Stalker[3], the guide takes his charges into a mystical landscape, promising miracles and revelations. The journey seems to be heading towards nothingness, a failure to live up to its promise. However, the final scene reveals that the true magic has been residing, all along, in the guide’s own home. The point of the journey has been to bring him (and us) to this profound realisation.

This is a recurrent theme in science fiction. If you have been browsing the archive we have left for you, you will already be aware how much we value the work of the great American author Ursula Le Guin. Many of her works describe journeys that are in some way circular. In her marvellous story for children, A Wizard of Earthsea, the protagonist Ged embarks on an epic quest to confront the demon he has released into the world. In the end he has to accept the reality that the shadow he has been seeking is actually part of his own self:

“A man would know the end he goes to, but he cannot know it if he does not turn, and return to his beginning, and hold that beginning in his being.”[4]

And so, children of the future age, consider this. You have arrived in a brave new world. But your real journey has only just begun. There is still an aching need to incorporate your legacy – our legacy – into your hearts. Your greatest discoveries lie ahead of you, and they will come as much from within you as from without. Until you truly know yourselves, you are still some way from the place you can truly call home. But be assured that “home” is out there – in there – calling to you…

Finally, please accept this advice from another of Ursula Le Guin’s great works, from which the title of this short essay is derived: 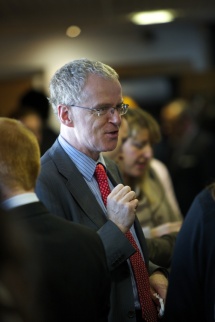 Paul Murphy has had a varied career in public and private sectors, central and local government, and higher education. He gives an annual lecture to undergraduates in the English Department at York St John University which is the highlight of his year.