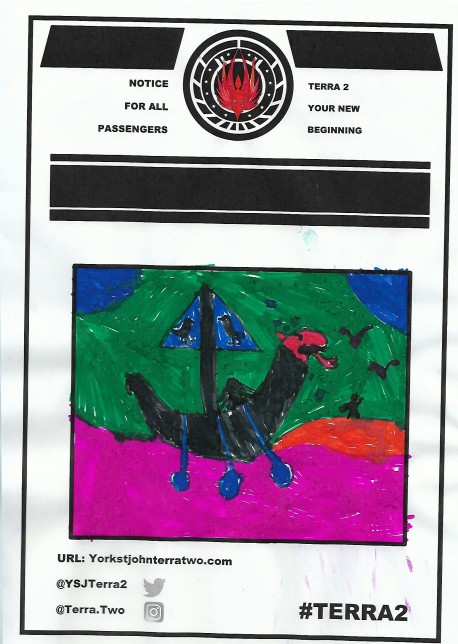 Iduna’s first worry was the sea. Instead of being whale-grey and surging, it was a shimmering pink. The contrast against the sky, which was as green as a high pasture in summer, was very beautiful. But the sky shouldn’t be green. Even when the Northern Lights flickered across the winter skies in Iceland the swirls of green across the heavens were fleeting and dancing.  Here the green sky was just green. The sun was as blue as a swallow’s feather.  Iduna wanted to call back to her father that they were ready to strike land.  But frankly, she wasn’t and they weren’t.

Iduna didn’t think she could be more surprised but as she turned around there was a second sun. It was the same as the first one, blue.  Behind Iduna there were gruntings and grumblings. All the oarsman (except Erik Einvarsson who snored still) could feel that the water below them was no longer the surging water of the open sea and they had stopped rowing, looked up, and stared at the strangely lurid sky.  If there’s one thing that would upset a ship full of Vikings it would be landing somewhere with a green sky and two blue suns.  Even England with its strange customs didn’t have anything as outlandish as a green sky and two cobalt blue suns.

As Iduna looked towards the orange grass and the ship started to veer towards it she noticed there was a figure on the beach. At least this person was recognisable as a human. He was very tall and very thin, with a shock of black hair flowing in the breeze. His sword and war axe hung at his side, and Iduna was pleased to see that he was not reaching for it. Inevitably the ship’s prow crunched into the orange pebbles and gave the quiet satisfied groan that ships did when they had ended a long journey.  Iduna could see the stranger waiting on the shore far more closely now. He still did not reach for his sword or war axe which was heartening.  He did not smile but his piercing black eyes fixed on Iduna’s and she felt, oddly, as if he knew she was meant to land on this strange shore. This was quite unexpected as even her father had not known she was on board the ship.  She had hidden herself in a barrel back in Reykjavik, determined that she would go to sea, even if girls were meant to stay home and salt fish and weave cloth.  Iduna had longed to see icebergs and whales and the canopy of the stars spread across the whole horizon, so into the barrel she had crept.  When she was discovered (extremely sick) two days into the journey, her father had been furious and had threatened to throw her in to feed the fishes.  But then he had relented, laughed his bubbling laugh, and assigned her piercing young eyes the job of standing in the prow and watching the horizon.  And stand there she had, through gales and high seas, searching expectantly for a new shore.  And now, it was unarguable — they were on a new shore.  A very strange one.

‘I knew you were coming’, he said, ‘but it’s taken you a long time to arrive’. Iduna blinked.  His words were in her language but there was a strange cadence to his accent.  He reached his hand up to her to help her jump from the ship, and Iduna felt strangely compelled to accept it.  Down she jumped, her feet crunching into the shingle.  Behind her, her father shouted a warning noise, but Iduna could barely hear him above the whispering of the surf in the shingle and the blood rushing through her ears. A wicked smile flashed momentarily through the man on the beach’s eyes and then his voice rung out loud and clear.

‘Vikings of Reykjavik’, he spoke, ‘many miles have you journeyed across the seas to deliver Iduna to us. You, who are used to travelling the seas and navigating by the stars, have travelled far further.  Instead of navigating by the stars, you navigated through the stars, and this planet is forbidden to you.  People of your world may not step on to the shores of Asgard. So sleep, Vikings of Reykjavik. Sleep’.  Instantly Iduna heard the snores of the men joining with those of Erik Einvarsson. She was all alone, on a beach, with this strange man.  What should she do next?

‘Loki’, he responded, ‘but that’s not important. We need to get moving.  You’ve been a long time coming’.

As she looked up she saw two ravens circling the shore; they swooped over the sail of the ship, looking exactly like the ones which adorned the sail.  Then they brought their huge wings in and shot towards the land, tracing a line for Loki and Iduna to follow.

Meredith (illustrator and visionary, aged 10) and Julia (writer, aged 45) both feel that the first off-world colony will have many children who will need stories about those who have travelled long distances in the past.  Meredith designed the world and imagined how Vikings might get into space.  Julia typed it up faithfully.

Categories: It's Written in the StarsTags: Children's story · Vikings