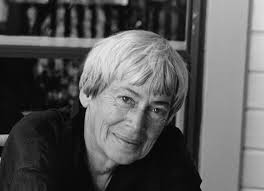 On November 7 2015, the day after I presented a paper to the Pacific and Ancient Modern Languages Association conference in Portland, Oregon on ‘Spiritual Directions in Ursula K. Le Guin’, I met the author in person. My aunt, Oregon resident, had surprised me with a ticket to hear Le Guin speak at ‘Wordstock’, a literary festival in Portland.  Unbelievably, in an incredibly crowded venue, my aunt and I found seating just four rows away from where Ursula Le Guin was being interviewed.  During the interview I sat with tears in my eyes as I listened to my hero speak. Here sat the writer who had brought us The Wizard of Earthsea and The Left Hand of Darkness!  I clutched a copy of my conference paper (see extract on T2) in a pale blue buttoned folder. At the bottom of it I had handwritten a note of thanks, with a paraphrased quotation from The Telling (2000) – ‘Where my guides lead me in kindness, I follow’, thinking that if an opportune moment arose, I would give it to her. But as I sat there in the huge crowd, I doubted the wisdom of embarrassing either of us!  It was my aunt who played the key role in what was to happen next – she whispered, as Le Guin began to leave the stage with the assistance of a young man, ‘Go on Liesl, Go Go Go!!!’ And, used to obeying my wonderful aunt from young, I did. I sidled swiftly and unceremoniously past the audience members still in their chairs, paper in hot hand, and managed to get to Ursula Le Guin just as she exited to the right of the enormous room.  Now was my moment – no time for long pauses!  ‘Excuse me (I said to the gentleman escorting her out, glancing from him to her and then back again, with a rather exaggerated courtesy), would it be possible to give this to Ursula Le Guin when you have a chance?’  He took the blue folder, and I looked at her again. What happened next I will never forget.  She nodded at me. It was a slow nod, or so I remember.  It was a nod that said “Well done young lady (I was a just-turned fifty-year-old ), you have gone about this in a good way.” She didn’t smile, but her beautiful, wrinkled face was simultaneously kind and firm. And then she was gone. I have no idea if she read it or not. But I suspect that she did. Her books suggest to me that she is an extremely curious person, and my guess is that she opened the blue folder on her way home and read my short paper and note inside.

And this means a great deal to me, as if so, I have been able to thank her personally for enlarging my life and my spirit!